The Slav Epic with its conservator Tomáš Berger

Painting conservator, Tomas Berger, has been taking care of Mucha’s The Slav Epic for the past fourteen years. "I have experienced a lot with it," he says. He took care of the paintings when they were in Moravsky Krumlov as well as when traveling around the world. "The Epic is an amazing thing for people around the world to see," he adds.

Interview with Tomáš Berger - About The Slav Epic 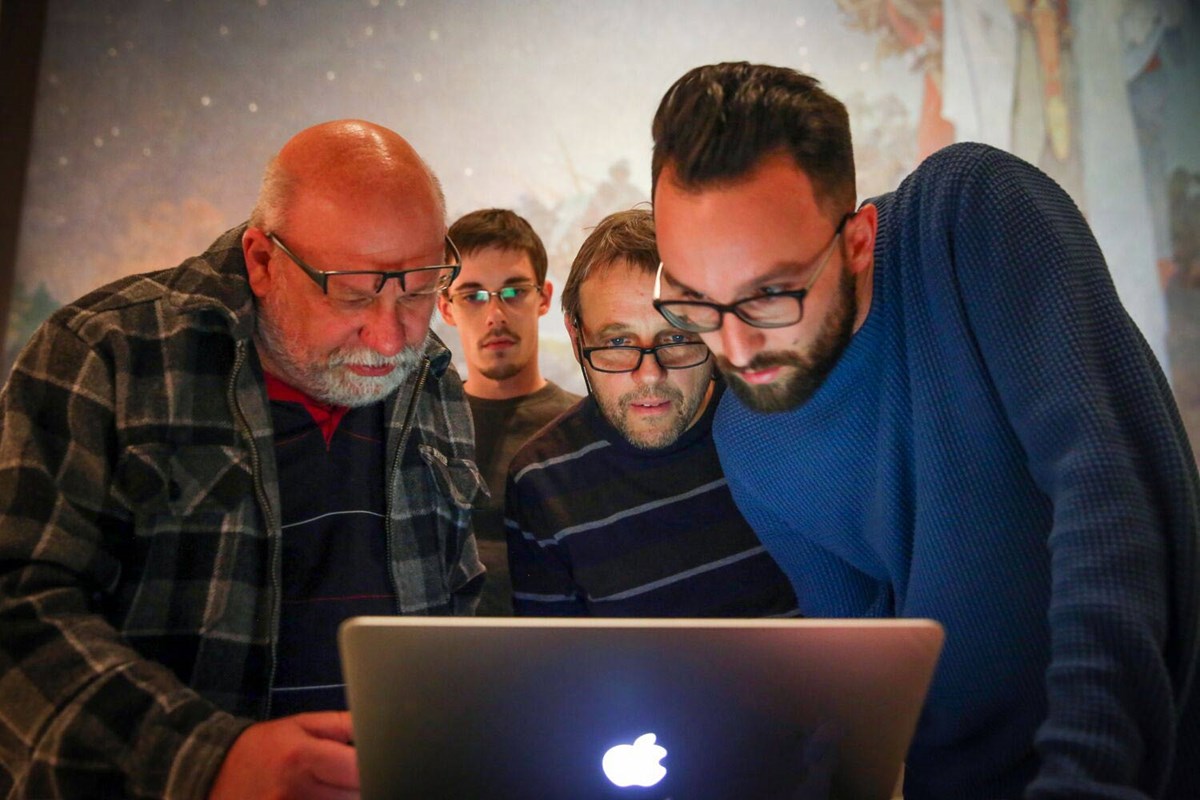 Why is The Epic so exceptional?

Mucha devoted 18 years of his life to the project. When he began to work on it, he was at the height of his career, a tremendously successful artist, having gained a great deal of experience in Paris for example. And he delivered the whole project for free.

He did it for the nation, for the Czech nation. He wanted to materialise its history. Mucha helped establish and steer the Art Nouveau era. He was far more capable than the painters before him. He prepared everything in detail. He had tiny drawings with charcoal, where he solved the colour of paintings, and he devoted himself to extreme training for each piece. He also traveled throughout Europe, visiting the places he had painted.

How did you become involved with The Slav Epic?

My admiration for Mucha was kindled by the former director of the Prague City Gallery, Karel Srp. He sent me to Moravský Krumlov instructing me that there was a need to do something with some paintings. I arrived in front of the canvases, I looked at them closely, they were great illustrations, I looked from afar, the monumentality fascinated me. It is incredible work. I imagined how a Baroque master would have done it, as Aleš or Ženíšek would do it in the 19th century... Mucha did it with a great deal of work, he was not only a great artist but he was also an excellent manager, holding a good relationship with the Prague Mayor, with whom he offered his work to Prague. 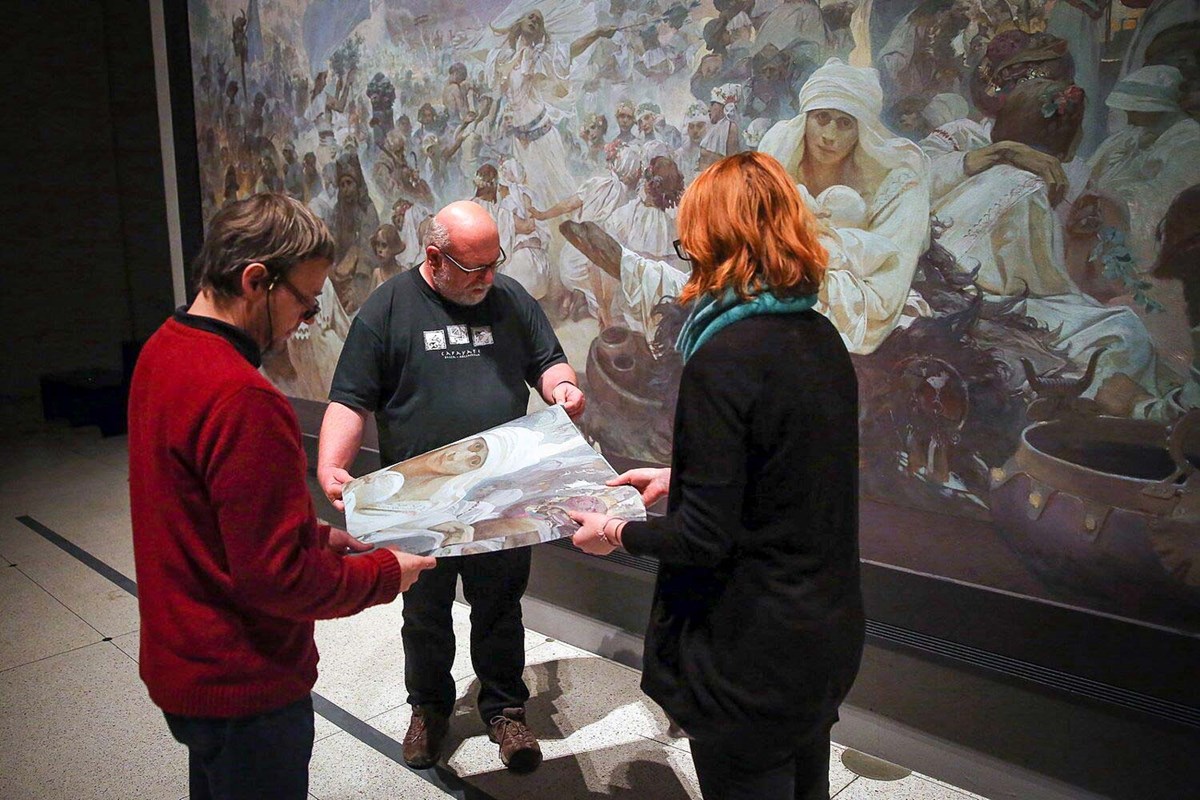 Why did Mucha donate The Slav Epic to Prague?

Prague was at that time the centre of ‘Slavicity’. The Poles, the Serbs, the Croats, all took it as the centre of all the Slavs. It was a multicultural centre. Mucha did it for Prague. Which of the other painters have done such a project?

Mucha's work is not only a positive emotion.

Why does Mucha inspire such emotions? Because people understand the work, as does Albatros in taking on such a monumental project as the The Epic book.

The Epic had a phenomenal success last year in Japan, in Tokyo. Did Mucha expect the work to travel?

For sure. Mucha counted on it. The work traveled during his lifetime and still travels today.

What care does The Epic require? Do you check it after it returns from loan?

Two pieces are always chosen after its return, for gentle cleansing and checking for scratches and flaking. It's nothing serious. The last time The Epic suffered was in Krumlov, just before moving to Prague, it suffered damage from visitors. The paintings were displayed there at minimal distances, so there were some traces of damage. But it was just cosmetic.

What kind of state are the works in? 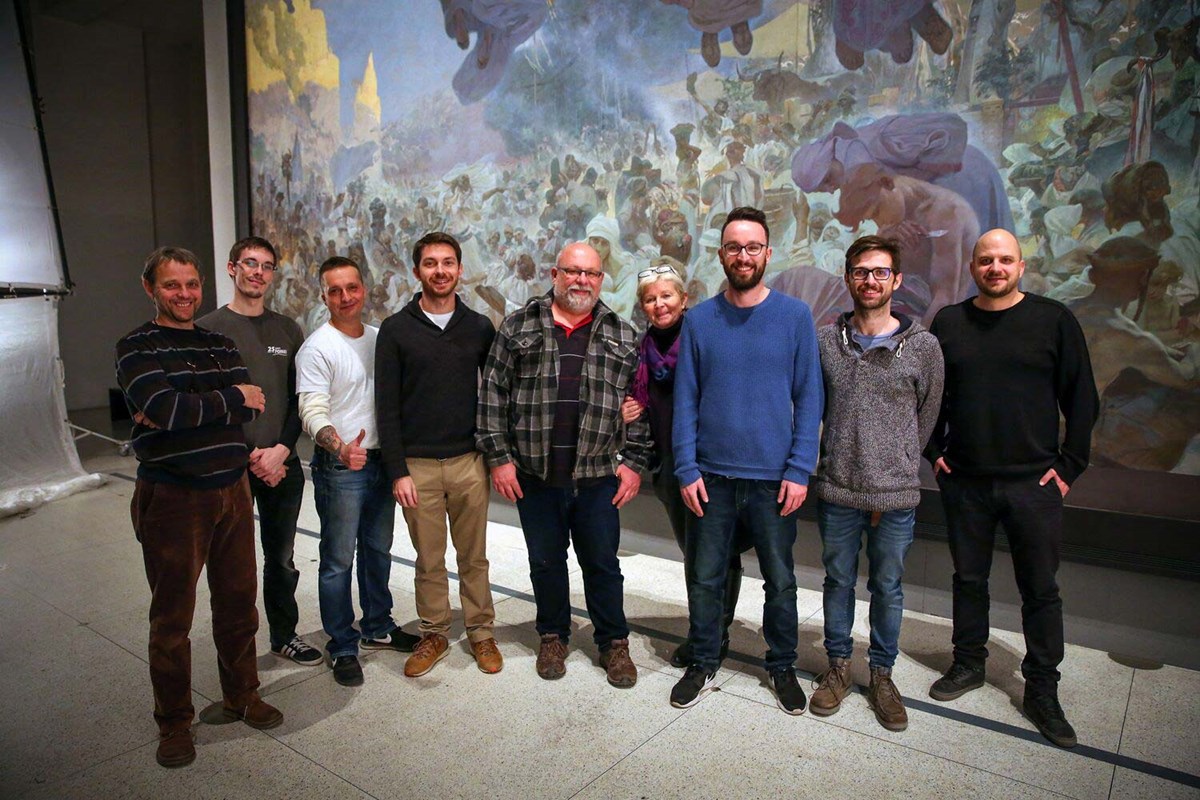 These pictures are in great shape for what they've been through. They were sheltered for eight years in the cloister of one monastery, covered only by a tarp. It was raining and snowing. If Mucha hadn’t painted them in his brilliant technique, most of the pictures would no longer exist.

Do you have a favourite picture in the cycle?

Whenever I stand before one of the pictures I notice something new. I know each one in detail, but every time I am surprised by something. It's a monumental painting from the early 20th century, but when you see how the figures, colours, atmosphere, smoke and fog are painted there, one has to say it's a masterpiece. It's precise in detail, you can see them close up as an illustration and if you stand back you get a whole different perspective.

Can you still find out new things about the Epic?

I was in Brooklyn, I wanted to know something about how they exhibited The Epic in 1921. The archivist found me a communication between Mucha and the director of the Brooklyn Museum where it was exhibited. It was larger then the Metropolitan Museum. Mucha then came to Brooklyn very enraged, because the painting of Master Jan Hus was crumpled, pierced and damaged. Mucha forbade them to carry the Epic to America. I know the work well, and I always wondered why it was damaged. When you look at it, you can see different spots after retouching. Maybe they were trying to stretch the canvas into the frame hung on the wall, and it fell to the ground, collapsed and broke. There is always something new to discover.